SALT LAKE CITY, Utah, Sept. 26, 2018 (Gephardt Daily) — The mark of an outstanding show for me as a reviewer is that I come out of it having no idea what I’m going to write because I was so completely involved in the story.

I left “A Funny Thing Happened on the Way to the Gynecologic Oncology Unit at Memorial Sloan Kettering Cancer Center of New York City” (yes, that’s the full title) at Salt Lake Acting Company with my mind and my heart still whirring with what had unfolded. Later, I realized I had no idea what I thought about the set, costumes and lighting because in the best possible way, I hadn’t given them any thought.

The show, by Halley Feiffer, has a fairly simple premise. An unlikely pair meets in an unlikely place for romance: the bedsides of their dying mothers, who are sharing
a room at Memorial Sloan Kettering Cancer Center.

Karla is a loud, crass comedian, trying to get her literal and figurative act together; Don is a lonely super-nerd with a big secret. They are diametrically different and at first, and sporadically as the play goes on, they bug the crap out of each other. But against the backdrop of watching their mothers wilt away before their eyes, they also form a profound connection.

The beauty of the script is how piercingly real it seems; it feels like watching a play by a modern Anton Chekhov or Emile Zola. My very favorite monologue is delivered by Chris DuVal, playing Don. It’s about why, when he gives Karla’s mother a drink of her tipple of choice, fizzy water, he narrates out loud bringing the sippy cup to her mouth. She asks him why he is narrating his actions, and what follows is one of the most tender, realistic monologues I have heard from a modern playwright.

A show as verbally and emotionally dense as this also of course lives or dies on the strength of its actors. Cassandra Stokes-Wylie, who is often cast at SLAC and other theaters locally, plays Karla, and DuVal, who I had not seen on stage before but is an actor and also head of the Actor Training Program at the University of Utah, depicts Don. Both are masterful; multi-layered, subtle, totally natural with absolutely clear character arcs. I didn’t want to miss one second of their performances.

And just when you began to think their two mothers are going to sleep through the whole show (because of the heavy pain meds they are on), Karla’s mother, Marcie, played by Marion Markham, wakes up. Markham is a SLAC newcomer, with a long list of theater credits including off Broadway work, and her performance is lovely. Without ever leaving her hospital bed, she creates a portrait of an obnoxious, hyper-critical, rather abrasive  social worker whose softer side seeps out like tears when she encounters genuine kindness.

As Geena, SLAC veteran Annette Wright doesn’t have many lines, but as always, her comic timing is impeccable, and there’s something about her that makes you want to watch her, even when she’s just “sleeping” in her bed.

SLAC’s production is directed by U of U professor Sarah Shippobotham, and she deftly navigates the veritable jungle of bad language, chunky monologues, and yes, even a fairly graphic intimate scene. Shippobotham manages to hack through the dense undergrowth to make sure every single moment not only makes sense, but resonates.

The production values are totally solid, but as I said before, I was so absorbed with the story and the performances that I had to revisit them in my thoughts afterwards as I really didn’t register them much as I was watching. The set design, by Thomas George, depicts a hospital room that is slightly warmer than, say, an ICU might be, with pink and white striped walls, but it’s still pretty stark. This, in a way, enhances the action still more as it shows how relationships can form in the most sterile settings. The costume design is by La Beene, lighting design is by James K. Larsen and sound design is Cynthia L. Kehr Rees– again, all enhance the story without stealing focus.

The show goes through Oct. 21, and really, I have to say, it makes me so proud to call Salt Lake City home. We’re lucky that we have a theater company, SLAC, kicking off its 48th season, that is not afraid to produce works that are both bold and gritty and poignant and incredibly moving. But not only that, we have actors and directors that are talented enough to make it an experience that I am still ruminating upon nearly a week after I saw the play. And it will stay with me much longer than that. 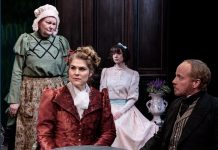 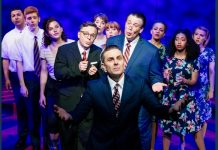