Utah playwright Tim Slover, experienced at historically inspired dramas, has turned his attention to Hildegard of Bingen (1098-1179), a Medieval period nun who was inspired to compose the sensual “Ordo Virtutum,” the earliest surviving morality play, set to music.

Hildegarde, played by Christy Summerhays, seems to have a spiritual glow about her when she is communing with God through visions. She also has patience and humor when dealing with human weakness in her superior, Abbot Cuno (Jay Perry), as he tries to coerce her into having visions that will serve his economic interests.

More pure of heart is Father Volmar (S.A. Rogers), who transcribes Hildegard’s words during her visions, which he believes come directly from God.

And entering this sacred community is Richardis (Emilie Starr), a young woman sent by her wealthy family to do penance after the discovery of a sin she doesn’t care to disclose. Cuno, of course, sees the arrival of Richardis as a chance to woo a wealthy family.

For Hildegard, everything changes with the arrival of Richardis, whom she sees as the embodiment of Anima, a wayward soul shown to her in an earlier vision of “Ordo Vitutum,” seen fighting with the devil.

And with the arrival of Richardis, inspired music suddenly accompanies the words Hildegard speaks in her visions. Since Richardis can transcribe music and Volmar cannot, a closeness forms between the two women, assigned to work together.

Slover’s words and direction by Jerry Rapier helps flesh out the four characters, who inspire variety of strong emotions in each other, including pride, envy, lust, anger and greed, a good sampling of the seven deadly sins.

The set, by Thomas George, has clean lines and the austere look of a monastery, and provides three separate acting spaces exchanges that range from warmly intimate to coldly impersonal.

Lighting, by Jesse Portillo, provides focus and mimics a golden candlelight that suits the story and its time period. Costumes by Phillip Lowe reflect formal inflexibility of the setting, and later, a flowing freedom from former constraints.

And each actor masterfully inhabits his or her characters. Summerhays is inspired as Hildegard, who has her faith tested and grows from the experience. Perry is a joy to watch as the smooth-talking manipulator Cuno, whose godly words veil his real-world motivations.

Rogers, as Volmar, is believable as a man of faith who struggles with only one or two human failings, and Starr is convincing as the conflicted, uncertain Richardis who finds something to believe in.

With its strong cast, direction and design, and its artful telling of a little known tale, “Virtue” offers an inspired night of theater.

“Virtue” continues through Feb. 26 at the Rose Wagner Center Studio Theatre. The run is sold out, but several of those who show up and the theater and get on a waiting list each night usually end up getting seats. For more information on the production and company, click here. 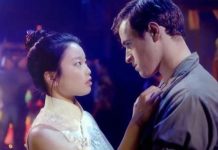 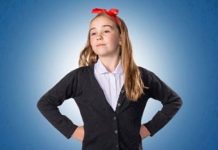