NICE, France, July 15 (UPI) — Music superstar Rihanna has canceled the show she planned to perform Friday in Nice in light of the massacre that took place in the French city Thursday evening.

“Due to the tragic events in ‪#‎Nice‬, Rihanna’s concert scheduled for today July 15 at Allianz Stadium will not be going ahead as planned,” reads a post on the artist’s Facebook page. “Our thoughts are with the victims and their families.”

Various other celebrities were quick to jump on social media to offer their thoughts on the terror by truck incident, which left 84 Bastille Day revelers dead and dozens injured.

“28 children among the wounded in #Nice hospitals. 2 died in surgery. In case God exists, prayers for them and all the victims. #Solidarity,” said actress and activist Mia Farrow.

“I live in #Nice! I live in #France. I live in a free, civilized world!!!” added actor Ron Perlman.

“My thoughts are with the people of France. #Nice,” offered actress Julianne Moore.

“Thoughts for France and Nice. Our greatest defiance is unity. Today we are France,” said actor Richard Armitage. 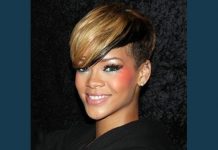 Rihanna sues father over use of Fenty name