The Hollywood Reporter broke the news, but said details about the project were not clear and the cable network has declined to comment on its story.

Deadline.com said the series is believed to be a re-boot of the classic “Perry Mason“ legal drama.

Downey Jr. played a scene-stealing role on “Ally McBeal” 2000-’02, but was fired because of his drug use and related legal troubles.

Clean and sober for several years, Downey Jr. is now one of Hollywood’s most popular movie stars, playing Iron Man in the Marvel superhero film franchise. 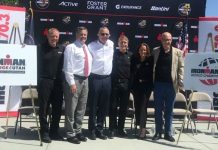