BEVERLY HILLS, Calif., Sept. 14 (UPI) — Robert Herjavec and Kym Johnson are happy and still together following Dancing with the Stars.

The 53-year-old Canadian television personality opened up about the 39-year-old Australian professional dancer in an interview with People magazine at The Brent Shapiro Foundation 10th Anniversary Summer Spectacular on Saturday.

“It feels like a lifetime ago,” he said of the couple’s time on the ABC reality competition. “I’m very grateful. It’s been great.

“It does [seem like a lifetime ago], but it’s only been eight months!” Johnson added. “We’re really happy.”

Herjavec and Johnson were partnered on season 20, and immediately sparked dating rumors with their chemistry on and off the dance floor. The pair were spotted kissing in Palm Springs, Calif., in May following their elimination in week 7 of competition. 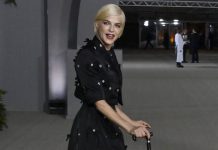