The cancer was said to be caught in the early stages, according to a brief social media post from Wyman’s team Tuesday, and he is expected to make a full recovery.

No further information regarding the musician’s status has been confirmed, nor has Wyman released a statement regarding his health.

Wyman performed with the Rolling Stones — currently consisting of Mick Jagger, Keith Richards, Ronnie Wood and Charlie Watts — between 1962 and 1993. Since he has been working as a solo bassist as well as in his own band, Rhythm Kings. 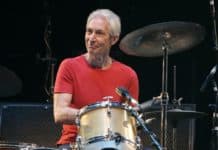