Oct. 14 (UPI) — Showtime announced Wednesday it is reviving its serial-killer drama “Dexter” for a limited series.

The post included a video with a blood-spattered background, the show’s title and the message: “Being away has been murder. Dexter returns.”

The clip got 2 million views in the first 2 hours it was online.

Production on the 10 new episodes is slated to begin, with Michael C. Hall returning to the title role, in early 2021.

Showrunner Clyde Phillips is also back for the revival, which is expected to premiere in late 2021. 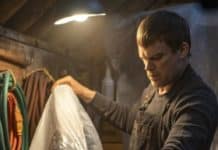