Poitier, the first Black man to win an Oscar for Best Actor for his role in “Lilies of the Field,” died Friday at the age of 94. A cause of death has not been announced.

Poitier was also known for starring in “The Defiant Ones,” “Porgy and Bess,” “A Raisin in the Sun,” “Guess Who’s Coming to Dinner” and more.

“If you wanted the sky I would write across the sky in letters that would soar a thousand feet high… To Sir… with Love. Sir Sidney Poitier R.I.P. He showed us how to reach for the stars,” Goldberg said on Twitter before noting in another tweet, “My condolences to his family and to all of us as well.”

Winfrey said on Twitter, “For me, the greatest of the ‘Great Trees’ has fallen: Sidney Poitier. My honor to have loved him as a mentor. Friend. Brother. Confidant. Wisdom teacher. The utmost, highest regard and praise for his most magnificent, gracious, eloquent life. I treasured him. I adored him. He had an enormous soul I will forever cherish. Blessing to Joanna and his world of beautiful daughters.”

Perry said on Instagram, “The grace and class that this man has shown throughout his entire life, the example he set for me, not only as a black man but as a human being will never be forgotten. There is no man in this business who has been more of a North Star for me than Sidney Poitier.”

Davis said on Instagram, “This is a big one. No words can describe how your work radically shifted my life. The dignity, normalcy, strength, excellence and sheer electricity you brought to your roles showed us that we, as Black folks, mattered!!”

“It was an honor for my husband and I to share lunch with you at Spagos, You told us, ‘If your dreams do not scare you, they’re not big enough.’ I put this quote on my daughter’s wall. Rest well Mr. Poitier. Thank you! Thank you for leaving a legacy. May flights of angels sing thee to thy rest,” Davis continued.

Wendell Pierce quoted Arthur Miller in honor of Poitier on Twitter, “‘There is a certain immortality involved in theater, not created by monuments and books, but through the knowledge an actor keeps to his dying day that on a certain afternoon, in an empty and dusty theater, he cast the shadow of a being that was not himself but the distillation of all that he had ever observed; all the unsingable heart song the ordinary man may feel but never utter, he gave voice to. And by that somehow joins the ages.'”

Jeffrey Wright said on Twitter, “Sidney Poitier. What a landmark actor. One of a kind. What a beautiful, gracious, warm, genuinely regal man. RIP, Sir. with love.”

Debbie Allen said on Twitter, “#SidneyPoitier, your last sunset with us is the dawn of many generations rising the path of light you blazed. We will always hold you in our hearts and forever speak your name.”

George Takei said on Twitter, “Sidney Poitier, the first Black man to win an Oscar, has died at the age of 94. The star of ‘Guess Who’s Coming to Dinner’ and ‘Lillies of the Field,’ for which he won Best Actor, was a trailblazer who will be mourned by so many for whom he opened the very doors of Hollywood.”

Mia Farrow said on Twitter, “Sidney Poitier — the best of the best RIP.”

Garcelle Beauvais said on Instagram, “Mr. Poitier thank you for your Legacy!! You showed us what it means to be great! Rest in Power.”

Joseph Gordon-Levitt said on Twitter, “Sidney Poitier. An absolute legend. One of the greats.”

Cary Elwes said on Twitter, “I once had the honor to shake Sidney Poitier’s hand. May he Rest in Power knowing he was loved and a trailblazer in our industry who lit up the screen with this talent.” 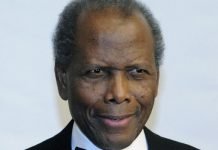