The New Jersey bikers were coming back from a Veterans Day ceremony in Holmdel when they spotted the 67-year-old, recording artist stranded on the side of the road by Allaire State Park on Friday.

Springsteen hitched a ride on Ryan Baily’s bike and the men headed to Mulligan’s in Farmingdale where the singer was picked up after enjoying a beer with the guys.

The American Legion post shared a photo of Dan Barkalow with the singer, but later updated the message to say: “What started out as a story of interest posted to our American Legion Facebook page has devolved into a nauseating political altercation full of vitriol and insults, none of which are from our members. If we are to survive as a nation both sides have to stop the hate. Both the incoming and outgoing presidents have asked for unity, we should listen.

“There are men and women serving in the military who are now deployed far from their home,” the message continued. “They are putting their lives at risk, they have left their families and the people they love to defend this nation. Please keep them in your thoughts and prayers.” 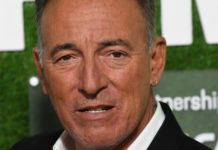