NEW YORK, June 12 (UPI) — Sunday’s Tony Awards ceremony will be dedicated to the victims of this weekend’s mass shooting at a gay nightclub in Orlando, producers announced via social media.

“Our hearts are heavy for the unimaginable tragedy that happened last night in Orlando. Our thoughts are with the families and friends of those affected. The Tony Awards dedicate tonight’s ceremony to them,” the official Tony’s Facebook account said Sunday, without offering specific details about how the gala might be altered to pay homage to the horrific event.

Orlando Mayor Buddy Dyer said that at least 50 people were killed and 53 more were hospitalized making this the deadliest shooting in U.S. history. The FBI assisted with the investigation and originally said domestic terrorism could not be ruled out, but later said they were awaiting more information.

The alleged gunman — identified as Omar Mateen — was killed in a gunfight with police. 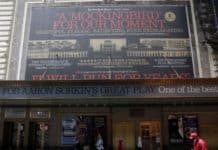