April 18 (UPI) — Taylor Swift announced Friday that she is canceling all scheduled 2020 live performances. She will reschedule the U.S. and Brazil legs of her tour for 2021.

In a tweet, Swift expressed her regret but encouraged her fans to continue supporting the stay-at-home orders in many states, social distancing and other quarantine measures to prevent the spread of coronavirus.

“I’ll see you on stage as soon as I can but right now what’s important is committing to this quarantine, for the sake of all of us,” Swift wrote.

Swift also attached a screenshot of a larger statement from her tour citing the recommendations of Health organizations and governments as the reason for canceling Swift’s live appearances and tours. They said tickets for U.S. and Brazil shows would transfer to the new dates when they are announced later this year. Ticketmaster will issue refunds upon request beginning May 1.

I’m so sad I won’t be able to see you guys in concert this year, but I know this is the right decision. Please, please stay healthy and safe. I’ll see you on stage as soon as I can but right now what’s important is committing to this quarantine, for the sake of all of us. 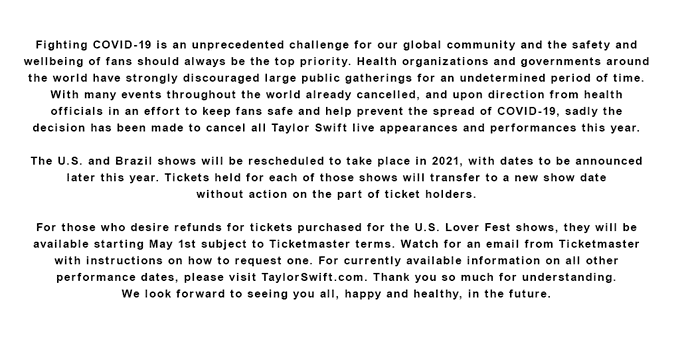 34.4K people are talking about this

“One World: Together At Home” begins at 8 p.m. EDT and airs simultaneously on NBC, CBS, ABC, ViacomCBS Networks, The CW, the BBC, iHeartMedia and other global networks and platforms.