“The Good Doctor” follows Shaun Murphy (Highmore), a surgeon and autistic person with savant syndrome, as he works at a prestigious hospital in San Jose. ABC released a Season 5 trailer last week that gives a glimpse of Shaun and Lea’s (Paige Spara) wedding.

On “GMA,” Highmore confirmed the season will feature Shaun and Lea’s marriage and new challenges at the hospital.

“Shaun and Lea’s marriage is certainly — it might not be everything that you’re expecting from the teaser … there’s certainly a lot of twists and turns along the way this season,” the actor said.

“There’s much more for Shaun to be confronting at the hospital, too. There’s a very difficult force of nature who’s going to be thrown upon him in the hospital, and it will be a battle to prove himself once more and prove his medical ability,” he added.

Christina Chang, who plays Dr. Audrey Lim, shared a photo with Highmore and Osvaldo Benavides, who plays Dr. Mateo Rendón Osma, on Instagram in August from the cast’s first day of filming on Season 5.

“And we’re back. I get to play with these guys on Day 1 of Season 5 of @thegooddoctorabc,” Chang captioned the post.

“The Good Doctor” is based on the South Korean series of the same name. David Shore serves as showrunner on the U.S. version, which also stars Hill Harper, Richard Schiff, Bria Samoné Henderson and Noah Galvin. 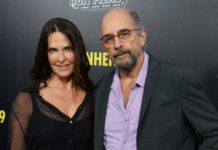