NEW YORK, April 7 (UPI) — Actor Michael McKean has built an extraordinary, decades-long career for someone who insists he “never had a plan.”

The 68-year-old native New Yorker first gained fame playing lovable loser Lenny in the classic sitcom “Laverne & Shirley,” then went on to star in a string of beloved Christopher Guest mockumentaries such as “This Is Spinal Tap,” “A Mighty Wind,” “Best in Show” and “For Your Consideration.”

He also had a brief stint as a cast member on “Saturday Night Live,” and has starred in the Broadway productions of “Hairspray,” “The Pajama Game,” “The Best Man” and “All the Way.”

“I have never had a plan,” McKean told UPI in a recent phone interview. “Things happen to me and, of course, I make friends who later say, ‘Hey, you know who would be good for this? McKean would be good for this.’ And they hire me and if they like me, they hire me again or the word gets out. You know, I’m really lucky to have been as busy as I have been for the past 40 years and to have been able to do a lot of different kinds of stuff. I’ve done a lot of comedy, but I don’t feel typecast.”

Reflecting on his career, McKean said opting early on to play characters that were vastly different from the iconic Lenny turned out to be one of his best decisions.

“After I left ‘Laverne & Shirley,’ I got a ton of offers to play the goofy guy next door and there were a couple of series that I was offered that turned out to be successful series, but it was too close to what I’d done on my series and I was really glad I didn’t take it. For one thing, in one case, the guy who took it was exactly the right guy and it wouldn’t have been as funny with me.

“So, the next two jobs that I had after ‘Laverne & Shirley’ were the movie ‘Young Doctors in Love,’ which was a minor hit, but I kind of played the cute, straight man in a movie full of lunatics, and the next thing I did after that was ‘This Is Spinal Tap,’ where I played an English lunatic.”

“So, if I had passed away right after that, at least people couldn’t have said, ‘Well, he could only do one thing,'” McKeon said.

McKean is earning rave reviews for his work in AMC’s “Breaking Bad” prequel “Better Call Saul” where he plays Chuck McGill, the legal-eagle, older brother of Bob Odenkirk‘s morally ambiguous, newbie attorney Jimmy/Saul. Although often doubtful about his sibling’s motives and abilities, Chuck is forced to depend on Jimmy when he becomes housebound due to the sudden onset of electromagnetic hypersensitivity.

The show has been a reunion of sorts since McKean has previously collaborated with both Odenkirk and series creator Vince Gilligan on other projects.

“Vince and I worked together on ‘The X-Files,'” the actor explained. “I did a string of shows as a character that he and Frank Spotnitz created and every time Vince had a new show, he would give me a shout and see if I was available and it never worked out before, and I’m really glad it worked out this way.”

“Bob, I knew just peripherally,” he noted. “He had just left ‘Saturday Night Live’ [where he was a writer] when I came in 1994 and, so, I just kind of had run into him a couple of times. He was just there because he had friends there and hung out a little bit, but I didn’t have too much interaction with him, and then I worked with him on ‘Mr. Show.’ I did an episode of ‘Mr. Show,’ which was a show I just adored and had that great experience, and then we would run into each other from time to time, and I am just glad I got the chance to work with him.”

Asked how he prepared to play a skillful attorney sidelined by a debilitating condition, he revealed, “I went through the laundry list of symptoms and I realized that, taken individually, I’ve had a lot of these things.”

He said it is fascinating to play a man who was at the top of his game before something out of his control humbles him and forces him to re-examine his life.

“In Chuck’s case, he counts on Jimmy for almost the entire first season. It gets really complicated in the second season because they continue an antagonistic relationship, but there is still this thing, there is still this fraternal thing and attention must be paid,” McKean said.

Even though McKean’s character is most frequently seen in his sad, dark home or in legal offices, the actor said he has enjoyed shooting the show on location in New Mexico.

“It always feels better to be in the real. The first movie I ever had a big role in was a Bob Zemeckis film called ‘Used Cars’ and it was my first location because I had been a sitcom actor. I had been on ‘Laverne & Shirley’… [which recently celebrated the 40th anniversary of its debut.] So, all of a sudden, I’m doing this movie and there is this camera crew and everything and I am crawling around under a recreational vehicle in real dirt and real glass and I said: ‘Well, this is a lot dirtier than working on a soundstage. This is a different deal.’ So, yeah, I love working on location. It’s great.”

The conversation made McKean recall a funny memory of filming “Man Trouble” more than two decades ago with Oscar-winner Jack Nicholson.

“I did a film once called — well, never mind. It’s not a good film,” he confessed. “But I had a fight with Jack Nicholson. We have this kind of fist fight and we wound up rolling down this hill in Griffith Park in the middle of the night and we get to the bottom of the hill and I’m just filthy and it’s just a mess and we’re both laughing and everything and Nicholson says: ‘This is what we like to do. They pay us to roll in the dirt.'”

McKean said reading and binge-watching are two ways he passes his non-working time while he is far from home during the four months a year he shoots ‘Better Call Saul.’

“There was a series called ‘Community.’ Very funny series that I somehow missed. I had seen a couple of episodes. I thought they were very funny, but I went back to the top and I’ve been watching that. I have to ration it, so I don’t run out,” he said. 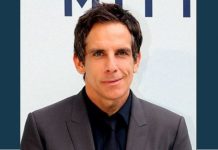