Nov. 14 (UPI) — Victoria Arlen and Val Chmerkovskiy were eliminated from Season 25 of Dancing with the Stars in Los Angeles Monday night.

“I want to say thank you so much to Victoria. Thank you to the show for trusting me with such an amazing, young woman. The future is bright for you,” Chmerkovskiy said as he stood by his visibly upset partner, a former paralympian swimmer and television personality.

Still in the running for the coveted mirror-ball trophy are Drew Scott and Emma Slater; Frankie Muniz and Witney Carson; Jordan Fisher and Lindsay Arnold; and Lindsey Stirling and Mark Ballas. 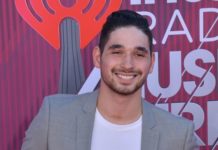 Alan Bersten, Britt Stewart, to be among ‘Dancing with the Stars’ pro lineup