“Football season is over,” declared the message that appeared across the screen, along with the reminder that fresh episodes of the zombie-apocalypse drama will resume airing Feb. 12.

About 15.2 million viewers tuned in for the 90-minute, mid-Season 7 finale when it was broadcast in December. 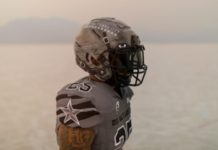