HOLLYWOOD, Calif., March 28, 2016 (Gephardt Daily) — Warner Bros. Pictures has released the new trailer for “Me Before You,” starring Sam Claflin and Emilia Clarke.

The story focuses on Lou Clark, who knows lots of things. She knows how many footsteps there are between the bus stop and home. She knows she likes working in The Buttered Bun tea shop and she knows she might not love her boyfriend, Patrick.

What Lou doesn’t know is she’s about to lose her job or that knowing what’s coming is what keeps her sane.

Will Traynor knows his motorcycle accident took away his desire to live. He knows everything feels very small and rather joyless now and he knows exactly how he’s going to put a stop to that.

What Will doesn’t know is that Lou is about to burst into his world in a riot of color. And neither of them knows they’re going to change each other for all time.

“You Before Me” opens in theaters June 3 and is rated PG-13. 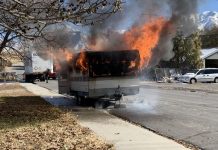