LONDON, England, Feb. 10, 2016 (UPI) — Will Smith and wife Jada Pinkett Smith took a hands-off approach with their children to encourage them to be themselves.

“Yeah, I think it may have been a mistake. I think we may have gone too far,” the star joked of his parenting style. “There’s a really powerful, internal quality as an artist that as parents we encourage. You got to get out on the edge, you have to try things.

“Jaden is 100 percent fearless,” he added. “He will do anything. As a parent, it’s scary. It’s really terrifying. but he is completely willing to live and die by his own artistic decisions. He just doesn’t concern himself with what people think.”

Jaden is known for his experimental fashion choices, including a white Batman suit he wore to prom. The 17-year-old also fronted a Louis Vuitton womenswear campaign in January wearing a skirt, macrame top and leather jacket.

“I’m just expressing how I feel inside, which is really no particular way because every day it changes how I feel about the world and myself, but I like wearing super drapey things so I can feel as though I’m a superhero,” the teenager previously explained of his Batman costume.

Smith and Jada will boycott the Oscars this month to protest a lack of diversity in nominations. The actor told the BBC he still finds former Fresh Prince of Bel-Air co-star Janet Hubert “brilliant” despite the actress criticizing the boycott. 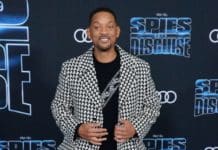