May 18 (UPI) — ABC released the first teaser of the network’s “Wonder Years” reboot ahead of their Upfront presentation to advertisers. The new series features a Black family growing up in the ’60s.

The teaser includes Joe Cocker’s rendition of “With a Little Help From My Friends” which served as the theme song of the original series. It shows Elisha Williams riding his bike down the neighborhood street as his older self (Don Cheadle) remembers.

“It’s the little things that you remember all your life,” Cheadle says.

The teaser continues to show Williams playing baseball and pining after a classroom crush. It ends when his father (Dule Hill) comes to watch him play baseball.

“The Wonder Years” ran for six seasons from 1988 to 1993. A modern-day Kevin Arnold (voice of Daniel Stern) reminisced about growing up in the ’60s and ’70s, having milestone moments like first loves while tumultuous historical events occurred. 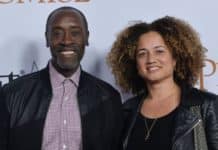