May 24 (UPI) — Republican lawmakers’ third attempt at replacing the Affordable Care Act has already passed the House, but an uncertain climate in the Senate — as well as a new forecast analysis Wednesday — could dim the bill’s prospects at becoming law.

The nonpartisan Congressional Budget Office issued its long-awaited review of the current American Health Care Act on Wednesday — saying it would leave 14 million more Americans uninsured next year than the ACA would have.

The CBO’s analysis of the first two versions of the AHCA, which was pulled before even getting a vote in the House, noted that 24 million Americans would lose coverage by 2026. Wednesday’s report said the new bill doesn’t improve on that figure much, as it would still leave 23 million uncovered over the same period — a net gain of about 1 million people.

Further, the new proposal also would only cut the federal deficit by $119 billion in the next decade — the least amount of all three versions — the CBO report said. The first showed a savings of $337 billion and the second $150 billion.

“In 2026, an estimated 51 million people under age 65 would be uninsured, compared with 28 million who would lack insurance that year under current law. Under the legislation, a few million of those people would use tax credits to purchase policies that would not cover major medical risks.”

House Republicans were criticized by Democrats on May 4 when they barely passed the new AHCA by a vote of 217-213, partly because they pushed it onto the Senate without even seeing the new CBO analysis.

Now that the report has been issued, the GOP proposal, known colloquially as “Trumpcare,” is again the target of Democratic lawmakers.

One of the primary reasons the first two editions of the AHCA failed was because it didn’t have enough Democrat or Republican support. Conservatives didn’t like it because they said it didn’t go far enough in repealing the ACA, and other GOP lawmakers shunned the proposal because they said it would leave left too many Americans without insurance. 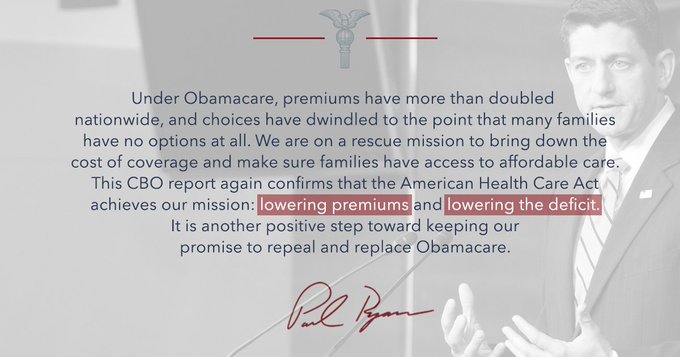 This @USCBO report again confirms that the American Health Care Act will lower premiums and the deficit. http://spkrryan.us/2qQkH61

Wednesday’s report, which some see as a downgrade from the previous two, is expected to foster similar concerns in the Senate. The upper chamber has already said it plans to make major changes to the House version of the bill, and Senate Majority Leader Mitch McConnell has indicated that the bill doesn’t have enough votes in the chamber to pass.

“Despite the pleas of families across America and the urgent warnings of almost every doctors’ and patient group, Republicans are still pushing to enact this moral monstrosity,” Pelosi added.

“The GOP should drop their dangerous attempts to sabotage health care for millions and work [with] Democrats to improve our health care system,” Senate Minority Leader Charles Schumer said Wednesday. 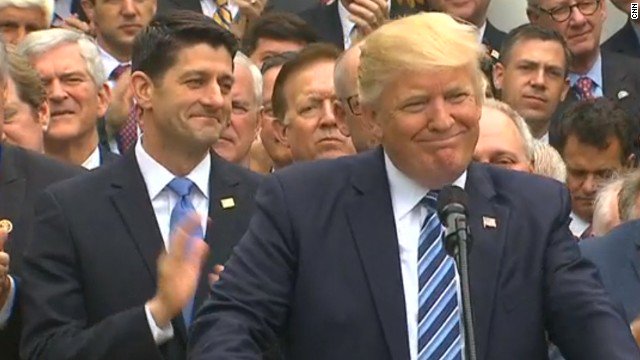 Reminder: This is how Republicans celebrated when they passed this bill that takes health care away from 23 million Americans.

House Speaker Paul Ryan responded Wednesday by praising the report, which did acknowledge that the new AHCA would “slightly” increase coverage compared with the previous two versions.

“This CBO report again confirms that the American Health Care Act achieves our missions: lowering premiums and lowering the deficit,” he said. “It is another positive step toward keeping our promise to repeal and replace Obamacare.”

“The CBO also identified that this bill will reduce the deficit by $119 billion, paving the way for the Senate to do its work to repeal and replace Obamacare,” House Majority Leader Kevin McCarthy added.

The new analysis, though, warned that premiums under the new AHCA would fluctuate greatly depending on the health of American buyers.

“Average premiums for insurance purchased individually — that is, nongroup insurance — would be lower, in part because the insurance, on average, would pay for a smaller proportion of health care costs,” the CBO said. “Premiums would vary significantly according to health status and the types of benefits provided, and less healthy people would face extremely high premiums.” 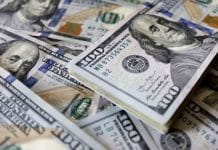 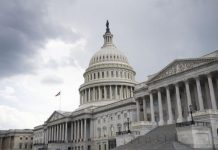 CBO will not release GOP healthcare bill analysis on Monday