July 21 (UPI) — Federal health officials are linking dozens of salmonella infections and at least one death to the consumption of yellow Maradol papayas in the past two months.

The U.S. Centers for Disease Control and Prevention said 47 people in 12 states have become sick after eating the fruit, 12 of whom were hospitalized. Patients reported symptoms beginning between May 17 and June 28.

The source of the contamination is unclear.

“Investigators are working to learn where the contamination occurred in the supply chain,” the CDC said.

The agency said that if consumers aren’t sure if their papaya is a yellow Maradol papaya, ask the proprietor who sold it to them. If in doubt, throw it out.

Yellow Maradol papayas are a large, oval fruit that weighs 3 more pounds. They have green skins that turn yellow when the fruit is ripe. The flesh of the fruit is salmon colored.

The majority of the cases happened in New York (13) and New Jersey (12). There were six cases in Virginia, five in Maryland and four in Pennsylvania. There was one in each in Iowa, Kentucky, Louisiana, Massachusetts, Minnesota, Texas and Utah. Those sickened ranged in age from 1 to 95.

The symptoms of salmonella infection include diarrhea, fever and abdominal cramps. The illness usually lasts four to seven days and sometimes requires hospitalization.

Children under the age of 5, adults older than 65 and people with weakened immune systems are more susceptible to severe cases of salmonella. 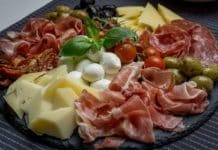