PRINCETON, N.J., Nov. 2 (UPI) — A quiet “epidemic” of increases in mortality rates among white middle-aged Americans has caused as many deaths in the last two decades in the United States as the AIDS epidemic, according to a new study.

Researchers at Princeton University found a significant increase in the death rate for middle-aged white people from drugs and alcohol, suicide, chronic liver disease and cirrhosis since 1998 — patterns not seen among black or Hispanic Americans, or in other countries. The trends, they said, represent a turnaround from decades of continuous drops in the mortality rate.

Some of the increase in the death rate is pinned to the financial crisis and economic insecurity the United States has battled over the last decade, as well as self-reported declines in health, mental health and the ability to cope with stress, which may or may not be connected,

“Rising midlife mortality rates of white non-Hispanics were paralleled by increases in midlife morbidity,” researchers wrote in the study, published in the Proceedings of the National Academy of Sciences. “Self-reported declines in health, mental health, and ability to conduct activities of daily living, and increases in chronic pain and inability to work, as well as clinically measured deteriorations in liver function, all point to growing distress in this population.”

Princeton researchers used data from the Centers for Disease Control and several national health and nutrition surveys to track deaths in the United States between 1999 and 2013.

White people with some college education did not see a big change in death rates, and those with a college degree saw a slight decline in the death rate, however less educated white people’s death rate increased by 22 percent. Among the group with ahigh school diploma or less, deaths caused by drugs and alcohol increased fourfold, suicides increased by 81 percent and liver disease- and cirrhosis-related deaths went up by 50 percent.

The researchers suggest, in addition to continuing fallout from the financial crisis in 2008 and shifts in the overall American economy, increased reports of pain, and an large increase in the prescription and availability of opioid painkillers in the late 1990s may have a role in the rising death rate.

Angus Deaton, a professor of economics and international affairs at Princeton, pointed out the dangers of using strong opioid painkillers with children and said that if people are “drinking and drugging too much,” it’s not surprising there would be increased incidence of mental illness.

“With regards to the increase in mental illness, I think it is part and parcel of all of this bad stuff going on,” Deaton said in a press release. “What if what is happening is an epidemic of despair, that people on the bottom of the economic heap are being increasingly left out as inequality expands, then what we are seeing is just one more terrible consequence of slow growth and growing inequality.” 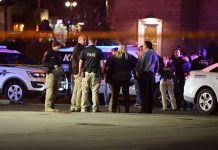