WASHINGTON, Nov. 19 (UPI) ─ On Thursday, the U.S. Food and Drug Administration approved a bid to sell genetically modified salmon in the United States. The company AquaBounty has sought FDA approval for their salmon products for the last 20 years.

“After an exhaustive and rigorous scientific review, FDA has arrived at the decision that AquAdvantage salmon is as safe to eat as any non-genetically engineered (GE) Atlantic salmon, and also as nutritious,” the agency wrote in a news release.

Though no law will require GM salmon, or products containing GM salmon, to be labeled as such, the FDA issued two documents guiding manufacturers on how to inform their customers of the presence of genetically modified ingredients.

“[Customers] want to know whether their food or any ingredients in their food is derived from genetically engineered sources,” the FDA warned.

“Both guidance documents explain FDA’s best thinking on how to make it easy for consumers to know whether a food was produced using genetic engineering or not,” added Felicia Billingslea, director of FDA’s Division of Food Labeling and Standards.

AquaBounty, a U.S. company, has already gained permission from environmental officials in Canada to harvest GM Atlantic salmon fish eggs at its facilities in Prince Edward Island. The fingerlings are reared in Canada and then shipped to Panama to fatten up in above-ground tanks. The fish are modified to grow twice as fast as unmodified farm-raised salmon.

The company says it will be at least two years before its fish hits U.S. markets. When it does, it likely won’t be labeled.

“When you’re the first and only, labeling is a dangerous decision,” AquaBounty CEO Ron Stotish told The Washington Post. “We’d like to label it as a premium product, but we’ll probably introduce it as ‘Atlantic salmon.'”

Labeled or not, the salmon may have a tough time getting stocked. Grocery chains Whole Foods and Trader Joe’s have already pledged not to carry GM salmon.

The scientific community has dismissed most health concerns about consuming genetically modified organisms, or GMOs, but some environmental groups suggest too many risks remain unknown and unstudied. Critics have expressed worries over the environmental and ecological consequences of GM fish should they escape into the wild.

The FDA will offer the public a chance to voice those concerns during the public comment period of their pending approval. 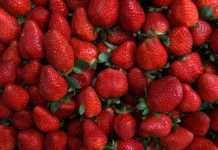