Jackson detailed the diagnosis in a letter addressed to “friends and supporters.”

“At 76 years old, I find it increasingly difficult to perform routine tasks, and getting around is more of a challenge,” it read. “My family and I began to notice changes about three years ago. For a while, I resisted interrupting my work to visit a doctor. But as my daily physical struggles intensified I could no longer ignore the symptoms, so I acquiesced.

“After a battery of tests, my physicians identified the issue as Parkinson’s disease, a disease that bested my father.”

Parkinson’s affects about one million Americans, the Parkinson’s Disease Foundation said. Its typical onset is after the age of 50 and is caused by excessive loss of dopamine, a neurotransmitter in the brain. Symptoms often start with hand tremors and progresses to other areas of the body over time. While not fatal, the disease can lead to life-threatening complications. About 15 percent to 25 percent of Parkinson’s patients have a family member with the disease.

Jackson, a Presidential Medal of Freedom honoree, has been a leader of the civil rights movement in the United States for decades. He twice ran for the Democratic Party’s presidential nomination, in 1984 and 1988. He spoke out most recently in 2014 about the Ferguson, Mo., police shooting of Michael Brown, whose death ignited protests and a national debate about police and race.

His son, Jesse Jackson Jr, is a former member of Congress from Illinois.

“Recognition of the effects of this disease on me has been painful, and I have been slow to grasp the gravity of it. For me, a Parkinson’s diagnosis is not a stop sign but rather a signal that I must make lifestyle changes and dedicate myself to physical therapy in hopes of slowing the disease’s progression,” Jackson continued in his letter. “This diagnosis is personal but it is more than that. It is an opportunity for me to use my voice to help in finding a cure for a disease that afflicts 7 to 10 million worldwide.

“I will need your prayers and graceful understanding as I undertake this new challenge. As we continue in the struggle for human rights, remember that God will see us through, even in our midnight moments.

“I steadfastly affirm that I would rather wear out than rust out.” 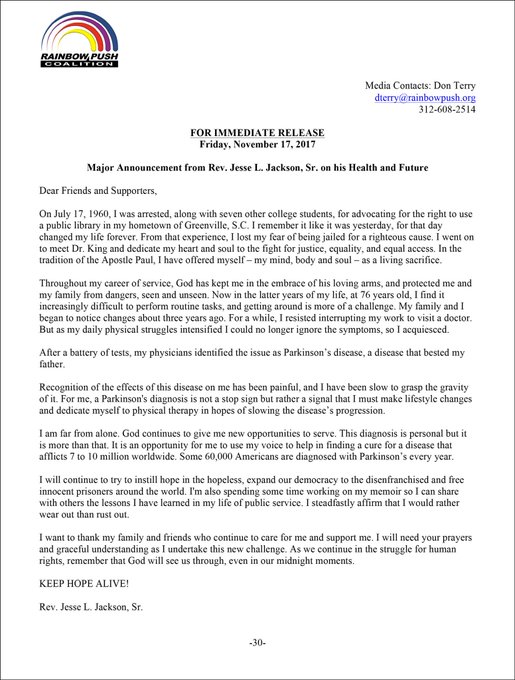 MAJOR ANNOUNCEMENT to my friends and supporters on my health and the future.