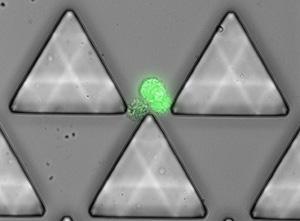 BOSTON, May 18 (UPI) — Researchers at Massachussetts General Hospital have designed a microchip that allows clumps of cancer cells to be captured from a patient’s blood sample. The device is expected to help learn how cancer can move through the bloodstream from one organ to another.
[one_fourth]

[/one_fourth][three_fourth_last]
Metastasis, described as the “holy grail” of cancer research, is the process by which cancer cells move from one organ in the body to another. Previous versions of the chip have only been able to catch single cells in the bloodstream but the new version can capture intact whole clumps of cancer cells while filtering out both red and white blood cells.

The clumps, called circulating tumor cells, or CTCs, occur in roughly 1 out of 1 billion cells but represent a primary way that researchers believe cancer travels between organs. The chip works by filtering blood through rows of triangle-shaped posts that catch CTCs as blood passes through its chambers.

“Early theories of cancer metastasis were based on clumps of tumor cells traveling through the bloodstream, but given that CTC clusters are even rarer in the blood than single CTCs, they have attracted minimal attention for several decades,” said Mehmet Toner, PhD, director of the BioMicroElectroMechanical Systems Resource Center in the MGH Center for Engineering in Medicine, in a press release.

“The ability to isolate intact clusters will enable us to investigate carefully their role in the metastatic process, and understanding metastasis really is the ‘Holy Grail’ of cancer research.”

A study based on testing of the chip is published in Nature Methods.