Sharpless, 52, the director of the National Cancer Institute, will take over the FDA next month. Azar made the announcement during an appearance before the House Committee on Energy and Commerce’s health subcommittee.

“We are going to be carrying forward Dr. Gottlieb’s vision,” Azar said. “His agenda is my agenda. My agenda is his agenda.”

Gottlieb announced his plan to resign last week, two years after President Donald Trump chose him to head the FDA. He said he wanted to leave to spend more time with his family in Connecticut.

“I’m immensely grateful for the opportunity to help lead this wonderful agency, for the support of my colleagues, for the public health goals we advanced together, and the strong support of [Azar] and [Trump] — This has been a wonderful journey and parting is very hard,” he tweeted.

“Scott has helped us to lower drug prices, get a record number of generic drugs approved and onto the market, and so many other things. He and his talents will be greatly missed!” the president tweeted.

Sharpless was named to the head of the National Cancer Institute in June 2017. 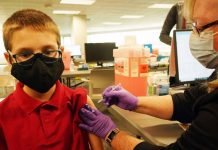