As of Tuesday, 149 people have reported being infected in the outbreak, which originated from tainted romaine lettuce grown in the Yuma, Ariz., region and has spread across 29 states.

Since the CDC’s last update on May 2, the outbreak has spread to four new states including Minnesota, Florida, North Dakota and Texas.

At least 64 people have been hospitalized, including 17 who have developed a type of kidney failure called hemolytic uremic syndrome. The first deathrelated to the outbreak was reported in California last week.

Sixty-four percent of the people who have been infected are female and those infected range in age from 1 to 88 years old, with a median age of 30.

The CDC said 112 people were interviewed as part of an investigation into the outbreak and 102 reported eating romaine lettuce in the week before they fell ill.

“This percentage is significantly higher than results from a survey of healthy people in which 46 percent reported eating romaine lettuce in the week before they were interviewed,” the CDC said.

Symptoms of illness due to E. coli bacteria are typically reported two to three weeks after a person becomes infected and therefore illnesses that occurred after April 17, 2018, may not have been reported yet. 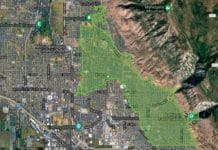