RHODE ISLAND, April 22, 2016 (HealthDay News) — When you sleep in a new place, a part of your brain remains alert for potential threats, a new study finds.

The findings might help explain why many people sleep poorly on their first night in a hotel, a sleep laboratory or other new location.

“In Japan they say, ‘if you change your pillow, you can’t sleep,’ ” study corresponding author Yuka Sasaki, research associate professor of cognitive linguistic and psychological sciences at Brown University in Rhode Island, said in a university news release. “You don’t sleep very well in a new place. We all know about it.”

The researchers measured brain activity in 35 people over two nights of slumber in a sleep lab, a week apart.

Among all the participants on the first night, one particular network in the brain’s left hemisphere showed greater activity than in the right hemisphere during a deep sleep phase called slow-wave sleep, the researchers said.

On the second night in the sleep lab, there were no significant differences in activity between the left and right brain hemispheres, not even in the network that was activated the first night.

During the day, that network — dubbed the default-mode network — tends to continue running when the brain is otherwise fairly idle, the researchers said.

Because they only measured the first slow-wave sleep phase, the study authors said they don’t know if the left default-mode network remains vigilant all night or if it works in shifts with the right side later in the night.

The study was published April 21 in the journal Current Biology. 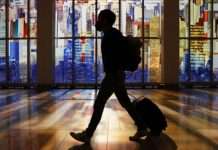