In a statement explaining the report, the nation’s top doctor noted that approximately 21 million Americans have substance abuse disorders involving alcohol or other drugs, a higher number than people with all types of cancer combined.

“Alcohol and drug addiction take an enormous toll on individuals, families, and communities,” Murthy said in a press release. “Most Americans know someone who has been touched by an alcohol or a drug use disorder. Yet 90 percent of people with a substance use disorder are not getting treatment. That has to change.”

“Although substance misuse problems and use disorders may occur at any age, adolescence and young adulthood are particularly critical at-risk periods,” Murthy added. “Preventing or even simply delaying young people from trying substances is important to reducing the likelihood of a use disorder later in life.”

The report goes on to recommend a change in the way Americans view addiction-related disorders, and encourages affected individuals to seek treatment.

“It’s time to change how we view addiction,” Murthy continued. “Not as a moral failing but as a chronic illness that must be treated with skill, urgency and compassion. The way we address this crisis is a test for America.” 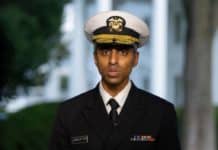