Jan. 20 (UPI) — Most people blink every few seconds, and yet our vision remains mostly constant. Our visual experience isn’t characterized by a constant back-and-forth between light and darkness.

What accounts for our seamless visuals?

New research suggests the brain works overtime to stabilize our vision. More than simply adjust for changing light levels, the brain also reorients the eyes each time they roll to the back of the socket and forward again as we blink.

“Our eye muscles are quite sluggish and imprecise, so the brain needs to constantly adapt its motor signals to make sure our eyes are pointing where they’re supposed to,” Gerrit Maus, an assistant professor of psychology at Nanyang Technological University in Singapore, said in a news release. “Our findings suggest that the brain gauges the difference in what we see before and after a blink, and commands the eye muscles to make the needed corrections.”

To better understand how human eyes handle the interruption of a blink, researchers had participants stare at a single dot on a screen as infrared cameras tracked the movement of their eyes.

During each blink, the dot moved — imperceptibly — one centimeter to the right. As the cameras revealed, the eyes of each participant instantly adjusted to the dot’s new position. After 30 blinks, participants’ eyes adjusted one centimeter to the right even when the dot failed to move. The eyes had become trained, and predicted an unnecessary adjustment before recalibrating.

“Even though participants did not consciously register that the dot had moved, their brains did, and adjusted with the corrective eye movement,” Maus said. “These findings add to our understanding of how the brain constantly adapts to changes, commanding our muscles to correct for errors in our bodies’ own hardware.”

The findings, published in the journal Current Biology, suggest it is our brain’s ability to constantly correct the failure of our eye muscles that explains the stability of human vision.

“We perceive coherence and not transient blindness because the brain connects the dots for us,” said study co-author David Whitney, a psychology professor at the University of California, Berkeley. 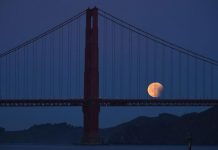 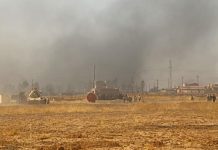