MIDVALE, Utah, Feb. 12, 2019 (Gephardt Daily) — A man died on Monday night after his bicycle and a vehicle collided in Midvale.

First responders discovered the victim unconscious and not breathing. CPR was performed, but the man could not be revived, and was pronounced dead at the scene.

Barker said it appeared the man was riding on a side street, and was struck when he entered Center Street. There was a witness, Barker said, and the driver stayed on scene and was cooperating with police.

Barker said the cyclist had a stop sign and the driver did not, but added that investigators were on scene, documenting evidence, and could not yet say for sure what happened.

Barker said that as of midnight, the victim had not yet been identified. 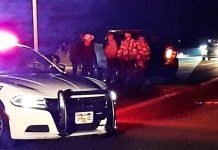