SALT LAKE CITY, Utah, June 3, 2020 (Gephardt Daily) — Officials have revealed the name of a second man charged in the destruction and torching of a Salt Lake City Police patrol car.

That vandalism followed a peaceful protest downtown, organized to draw attention to the death of a black man, George Floyd, who died when a white police officer in Minneapolis pressed his knee on Floyd’s neck while three other officers looked on or helped hold Floyd down on the ground.

At the time of Wednesday’s news conference in Salt Lake City, Brown said a second man had turned himself in and admitted he helped burn the police car. That man was Latroi Devon Newbins, 28. Both Patton and Newbins are from Salt Lake City.

The arson charge carries a penalty, on conviction, of five to 20 years in prison.

According to the complaint filed against Patton, video footage from the riot shows him tossing a combustible substance onto the car, causing the flames to increase. The fire destroyed the patrol car.

Officers arrested Patton on Tuesday night at a protest event in Salt Lake City, the news release said. An initial appearance in federal court will be set later.

The complaint and arrest of Patton were announced Wednesday by John W. Huber, U.S. Attorney for Utah and Chief Brown, among others.

“We value and support the rights we all enjoy to peacefully demonstrate and advocate for our beliefs,” Huber said. “However, we have zero tolerance for those who hijack peaceful protests and commit violations of federal law.

“Those involved in this criminal behavior — including the conduct alleged in this complaint — should know that we will use every available tool we have to hold them accountable.”

“Our detectives worked tirelessly to ascertain the identities of numerous perpetrators of violence and destruction in our city. We too are committed to bringing to justice those who attempted to interrupt the peaceful protest.

“We appreciate the partnerships we share with our federal agencies, to make sure that, through our shared resources, we are able to bring the correct judgment to these criminals.” 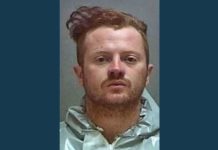