Three other juveniles were also injured, and were subsequently flown to area hospitals. An adult female passenger suffered minor injuries, according to information by the Utah Department of Public Safety.

The five people were traveling north in a maroon Dodge Caravan on Interstate 15 near mile post 194, the DPS statement says. The Dodge was behind a semi.

“This area is at the beginning of a construction project. The Dodge Caravan was traveling in the left lane and attempting to pass a semi as they entered a transition zone of the construction area where the left lane tapered into the right lane,” the statement says.

“The Dodge caravan quickly ran out space and was faced with either driving into the barrels, or side swiping the semi.”

The driver steered sharply to the left, entered the median and vaulted over the crossover, the statement says.

“Upon landing, the car rolled several times, ejecting four juveniles. The male driver was seriously injured and had to be extricated. The female adult passenger suffered minor injuries. Three of the juveniles were taken to the hospital and subsequently flown to another hospital.

“The fourth female juvenile, aged 11, received treatment from some paramedics who were passing by, but was ultimately declared deceased at the scene.”

None of the juveniles were wearing seatbelts, the statement said.

“The Utah Highway Patrol urges drivers to reduce speed in constructions zone, follow all traffic control signs and merge lanes early if possible. UHP urges the importance of seat belts and child restraints and how they save lives.” 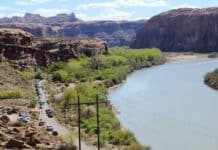