The park has a pond that is three acres long and 15 feet deep at the deepest point.

“Around 5:30 p.m., we received a 911 call about a young man who had drowned,” said a news release from Springville Police Department. “There was a nurse practitioner at the park who saw the victim’s friends pulling him out of the water and immediately started CPR.”

Officers and medics got there shortly after and took over the CPR efforts. They tried for 15 minutes to revive the young man, but were unsuccessful, the news release said.

“This is a heartbreaking incident for his family, his friends that were there with him, and to everyone at the park yesterday,” the news release added. “No family should have to bury a child and our thoughts and prayers are with this young man’s family.”

The man’s name has not been released.

“Thank you to all of those who assisted in the life-saving efforts,” the news release said. 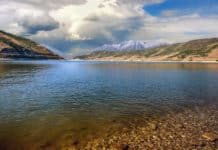