Sgt. Cameron Roden told Gephardt Daily the incident happened in the northbound lanes of I-15 in Lehi about 10:58 p.m.

According to Roden, a Honda Pilot was stopped in traffic when it was struck from behind by a northbound Nissan.

The driver of the Pilot was gravely injured and taken to the hospital in critical condition, Roden said.

“The passenger of the Nissan was also transported in critical condition,” while the driver was reported in “Bravo” condition.

Traffic in the northbound lanes was reopened about 2:30 a.m. 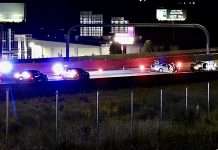 Update: 2 dead after SUV stops in middle of I-15 with lights turned off