Cyle Vankomen, 24, was a resident of the home in the area of 3600 Ogden Ave., where the shooting occurred, according to a news release from South Ogden Police.

Kevin Nelson, 61, was a resident of a home nearby.

According to the news release, officers were dispatched at 7:58 p.m. to the 3600 block of Ogden Ave. on a report of a gunshot victim.

When officers arrived, they found two males who had been shot to death and a third male who was seriously wounded.

Police said the wounded man, who is Hispanic and age 20, was also a resident of the home where the shooting occurred.  His name is being withheld for “investigative reasons,” police said.

The apparent motive for the crime appears to be a home invasion robbery.

Police say they currently have no information regarding a suspect.

Crime scene technicians are processing the scene with assistance from the Homicide Task Force of the Weber County Attorney’s Office. 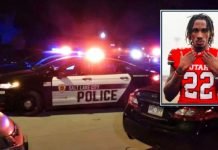