Crews responded to the fire at Diamond Self Storage, 50 S. Redwood Road, shortly after 9 p.m.

Capt. Adam Archuleta, with the Salt Lake City Fire Department, said multiple calls were received reporting the fire that originated in one of the units.

“We also confirmed that two patients received burn injuries. One was in serious condition and was transported to a local facility. The other had minor injuries and refused transport,” Archuleta said.

Both individuals are male, but no other information about them was available.

A vehicle was immediately adjacent to the storage unit that originally caught fire, but Archuleta was unable to confirm whether anyone was in the vehicle at the time the fire started.

Crews had the fire under control by 10 p.m. and it was extinguished a short while later.

Investigators have arrived on scene and the investigation is just getting underway. 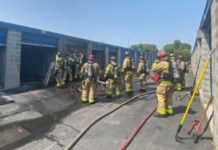