SALT LAKE CITY, Utah, Sept. 15, 2018 (Gephardt Daily) — Two people were grievously injured Friday when the van they were in went off the shoulder on the ramp from Interstate 215 to State Route 201.

The crash happened at 5:35 p.m., according to a Utah Highway Patrol news release.

A Chrysler Town and Country minivan was transitioning from I-215 southbound to SR-201 westbound, when the van went off the left shoulder and side-swiped a traffic camera pole.

After hitting the pole, the van rotated about 160 degrees, the release states.

The driver was transported by ambulance to Intermountain Medical Center in critical condition.

A passenger, who was sitting directly behind the driver, wasn’t wearing a seat belt and suffered severe head trauma when he hit the D-pillar as he was thrown around in the van. He was transported by helicopter to the University of Utah hospital.

A third passenger was on the passenger side in the middle row and was wearing his seat belt. He wasn’t injured.

UHP said some marijuana and drug paraphernalia were found in the van.

The ramp was closed so the helicopter could land and was reopened after officials  investigated the scene.

The news release said it wasn’t yet clear why the van went off the road. 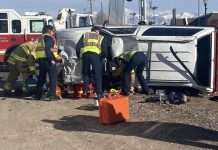 Car goes over cliff on Canyon Rd. in Provo, at least one transported to hospital

Man dead after single-vehicle crash on Redwood Road in Lehi