Hubert Ivan Ugarte, 52, of Draper, with the assistance of Lisa Bradshaw Rowberry, 49, of Provo, submitted a loan application to the Small Business Administration to obtain the PPP loan, according to the complaint, said a news release from the U.S. Attorney’s Office Utah.

“The CARES Act is a federal law enacted on March 29, designed to provide emergency financial assistance to millions of Americans suffering from the economic effects caused by the COVID-19 pandemic,” the news release said. “One source of relief provided by the CARES Act was the authorization of up to $249 billion in forgivable loans to small businesses for job retention and certain other expenses, through the PPP. In April 2020, Congress authorized more than $300 billion in additional PPP funding.”

According to the complaint, Ugarte, with Rowberry’s assistance, answered “no” to questions on the application asking whether he was under formal criminal charges in any jurisdiction. His answer was false because he was under federal indictment in Utah when he answered the question, the complaint alleges.

On Oct. 24, 2019, a federal grand jury in Utah returned an indictment charging Ugarte and others following a multi-year wire fraud and bribery scheme investigation in which it is alleged Ugarte bribed employees at the Salt Lake City hub of FedEx ground to obtain preferential treatment for his trucking companies. Ugarte faces four counts of wire fraud and six counts of money laundering in the pending case.

In filling out PPP loan application documents, Ugarte also allegedly circled “no” when asked if he had ever been placed on pretrial diversion. According to the complaint, he entered into a two-year pretrial diversion in 1988 to resolve a felony drug possession charge.

Before Ugarte and Rowberry completed the Borrower Certification for the PPP loan and submitted it to the SBA, Ugarte specifically agreed that at least 75 percent of the $210,000 loan would be used for payroll costs.

According to the complaint, the original PPP loan application was rejected or declined by two banks after they had discovered Ugarte was under federal indictment, the news release said. The complaint alleges Rowberry told an individual she was going to go with a friend she knew in the banking industry to re-apply for the PPP loan. On May 14, 2020, Ugarte received $210,000 from Transportation Alliance Bank.

“Instead of using at least 75 percent of the loan to pay payroll costs, including bounced payroll checks, Ugarte’s business account shows an automatic withdrawal to Kenworth Sales in the amount of $126,965.27 just four days after the loan was received,” the news release said. “The complaint alleges Ugarte’s company owed approximately $66,000 a month in lease or purchase payments to Kenworth for 13 tractors. Records show Kenworth received the money for truck payments and  small amount for various truck parts. The complaint alleges Ugarte used 60 percent of the loan to pay the past due truck payments — leaving 40 percent for payroll costs.”

Ugarte and Rowberry are charged with conspiracy, removal of property to prevent seizure, loan application fraud, wire fraud, and money laundering in the complaint. The conspiracy and removal of property to prevent seizure counts each carry potential five years sentences. Money laundering has a potential 10 year sentence and wire fraud is up to 20 years. The loan application fraud count is up to 30 years in prison and a $1 million fine.

The removal of property to prevent seizure count in the complaint alleges Ugarte received a payment of $60,957.82 for a wrecked tractor in Nevada after Rowberry submitted an insurance claim, the news release said. The check should have been turned over to the FBI subject to a seizure warrant in his FedEx fraud case. Rather than turn the money over to the FBI, the complaint alleges Rowberry deposited it into one of Ugarte’s accounts.

Individuals charged in complaints are presumed innocent unless or until proven guilty beyond a reasonable doubt in court.

Anyone with information about allegations of attempted fraud involving COVID-19 can report it by calling the Department of Justice’s National Center for Disaster Fraud Hotline at 866-720-5721 or via the NCDF Web Complaint Form here. 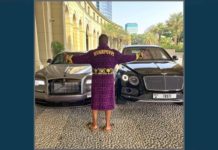