Officers were dispatched just before 9:50 a.m. to 1214 E. Main St. on a report of a drowning, Hermiston Police Department Capt. Travis Eynon said in a news release on Facebook. Umatilla County Fire District 1 EMS units were already enroute to the scene, the news release said.

“When the officers arrived on scene, they found CPR and other lifesaving measures were in progress,” the news release said. “We learned the child was found in an in-ground swimming pool after a short search when she went missing from the yard.”

A family member immediately began CPR and emergency units were summoned. The child was then transported to Good Shepherd Medical Center, where she died.

“There does not appear to be anything suspicious about this event,” the news release goes on. “At this point, it does appear to be a case of accidental drowning.”

Police have not identified the girl. The child and her parents were in Hermiston from Utah visiting family, officials said. They did not say where in Utah the family was from.

“Tragedies such as this are obviously painful for the family,” the news release said. “They are also hard on our first responders as well as our entire community. Our thoughts and prayers go out to the family during this difficult time.” 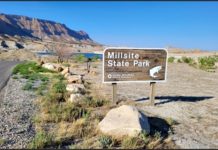