Police say the woman was crossing the street in a crosswalk when she was hit by a Jeep Cherokee that was heading southbound.

The woman was declared dead at the scene. 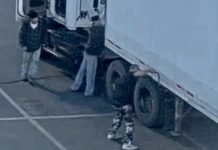