Officials said the motorcyclist was traveling on Old Highway 91 when he lost control for an unknown reason and crashed into the pickup truck, which was traveling in the opposite direction.

The 24-year-old driver of the motorcycle was ejected and died at the scene. His17-year-old passenger was transported to hospital, officials said. The passenger’s injuries are not thought to be life-threatening. Both people on the motorcycle were wearing helmets.

The man and the woman in the pickup truck were not injured in the crash.

The name of the deceased man has not been released pending notification of family. 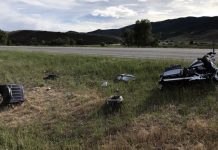 Motorcyclist fatally injured in crash on I-80 in Summit County