DAVIS COUNTY, Utah, June 24, 2019 (Gephardt Daily) — Three cows were killed when a cattle trailer separated from a truck and rolled on southbound Interstate 15 in the area of Glover Lane Sunday night.

The truck swerved to avoid another vehicle and over-corrected, officials said.

The trailer, which was carrying three cows and a bull, then broke free and rolled.

The three cows that were inside the trailer died and the bull survived, officials said.

The driver of the truck was not injured. 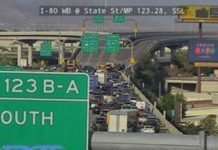