The crash occurred in the area of 6560 N. Landmark Drive, said a statement from Park City Police Department.

“Deputies were dispatched to a slide-off involving multiple cars,” the statement says. “It was determined that the slide-offs were caused by significant black ice on Landmark Drive next to the Best Western.”

“To avoid the three-car crash, a fourth vehicle slid off the road and went into the wood fence in front of Best Western, nearly going over the side of the hill,” the statement added. “A fifth vehicle was also involved, however there was no damage to that vehicle.”

No one was injured as a result of the incident. 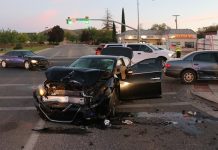