Ryan said witnesses told investigators the motorcyclist was traveling at a high rate of speed, and failed to negotiate a corner.

The motorcycle went off the road and crashed, and the man was ejected, Ryan said.

The man, who was wearing a helmet and protective gear, succumbed to his injuries on scene.

Ryan said a reconstruction team is on scene, working to determine exactly what occurred. 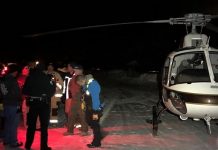