WEST VALLEY CITY, Utah, Jan. 28, 2018 (Gephardt Daily) — The remaining suspect in a carjacking, in which a man was threatened with a machete as his cellphone and vehicle were stolen, has been arrested.

Officers already knew Perez was the suspect they were looking for in the earlier carjacking, Maurer told Gephardt Daily.

The two other suspects in that case — Paige Patten, 22, and Kilpatrick Ward, 21 — had been arrested and told police Perez was the man who used the machete to intimidate the victim.

Initially, police said the victim met two males and a female in the park to sell a phone, and one of the males had a machete. They took the victim’s car and left him there, police said.

It was later learned that the victim had agreed to meet only the woman in Valley Fair Mall.

The victim said the woman first delayed the meeting and then asked him to meet her at Hunter Park instead of Valley Fair.

He said the woman arrived alone, and it was only after they were looking at the phone that another car came up and two men got out, one brandishing the machete.

Investigators followed leads and took Patten and Ward into custody later on Saturday. After being questioned, the two were booked into jail on charges of aggravated robbery.

The stolen car was recovered, as well as the vehicle used by the suspects. 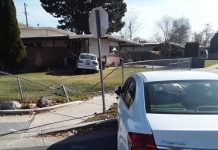