The winds blew some of the fireworks outside the safe zone and into the crowd, Comeau said, at which point the decision was made to cut the display short.

No one else was injured in the accident. 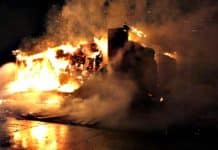