GOIANIA, Brazil, Dec. 2, 2018 (Gephardt Daily) — Four congregation members at a Church of Jesus Christ of Latter-day Saints chapel in Goiânia, Brazil, were injured along with a suspect who entered the building with multiple knives Sunday morning.

The Brazil Area Presidency said in a prepared statement: “We are saddened to report that this morning, a man entered a chapel of The Church of Jesus Christ of Latter-day Saints in Goiânia, Brazil during a worship service and threatened the congregation with multiple knives.”

Four members of the congregation and the attacker were injured during the incident.

“All are receiving medical care, and police have arrested the attacker,” the statement said. “The Church is providing support to those who were present during the incident, and we are praying for all involved.”

It’s unclear how the churchgoers were injured, or the severity of their injuries.

The condition of the attacker is also unknown.

The LDS Church has been recognized in Brazil since 1930, and there are more than 1.5 million members of the faith throughout the nation.

Goiânia is the capital of Goiás state in central Brazil. Goiânia is approximately 125 miles southwest of Brasília, which is Brazil’s capital.

Police in Goiânia are expected to release a statement. 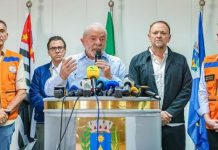