SPRINGVILLE, Utah, Dec. 5, 2019 (Gephardt Daily) — Five lanes of southbound Interstate 15 in Springville are closed Thursday afternoon after a crash in the area.

A news release from the Utah Highway Patrol said the incident occurred at 4:10 p.m. when a pickup ran out of gas and stopped on the left shoulder; and the occupants arranged for a rideshare to pick them up.

“The rideshare arrived but on the opposite side of the freeway,” the news release said. “The driver cut across all lanes and was struck almost broadside by a pickup in the HOV lane. The rideshare vehicle overturned and came to rest on its top in lane two.”

A semi with a single box trailer slowed suddenly in lane two and was struck from behind by a semi with double dump trailers, the news release said. A second pickup took evasive action and made contact with one of the dump trailers.

The rideshare driver was the only one to receive injuries, they were minor. 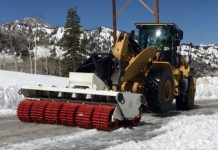 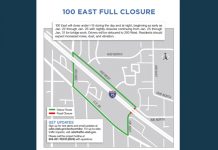 Part of 100 East to close under I-15 starting Wednesday