MILLCREEK, Utah, Oct. 12, 2018 (Gephardt Daily) — A Millcreek couple has been booked into the Salt Lake County Jail after they took the woman’s son to an emergency room unconscious, unresponsive, and with injuries that “may not be consistent with life,” a court statement says.

“On Oct. 11, 2018, a 5-year old boy was brought to Primary Children’s Hospital unconscious and unresponsive with numerous injuries,” says a statement from the Unified Police Department.

“The hospital notified the Unified Police Department. Our Violent Crimes and Special Victims Units are actively investigating this case. Two people have been taken into custody and booked into the Salt Lake County Jail on felony child abuse charges.”

The boy’s injuries are believed to have occurred at 4045 S.1300 East, apartment B, the police statement says.

Manning’s probable cause statement says the child, identified in court papers as T.S., had injuries that did not match the story told by the couple.

“Injuries to the child are at this time not consistent with explanations provided to physicians and investigators,” the statement says.

“The child’s injuries, according to a child abuse specialist, appear to have occurred over a period of time indicating more than one event. There is also concern of malnourishment. At this time the child is not responsive and ‘may be incompatible with life.'”

Manning was out on parole at the time of the child’s injury, the statement says. When told the child was on life support, Manning and Wills left the hospital for an unknown location, it says. They returned about 12 hours later, Wills’ probable cause statement says.

Manning had more than $13,000 cash on him when apprehended.

Manning and Wills are booked on identical charges: two counts each of child abuse — infliction of serious physical injury intentionally, a second-degree felony.

Anyone who may have information on the incident is asked to call the UPD Media Hotline at 385-468-9686. 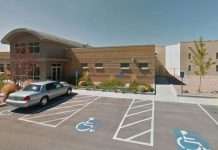