TAYLORSVILLE, Utah, May 28, 2019 (Gephardt Daily) — Unified Police Department was alerting the public Tuesday night that a traffic accident involving a vehicle and a power pole had caused the closure of 5400 South in Taylorsville from Redwood Road to 2200 West.

UPD said there were minor injuries as a result of the crash. 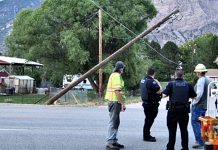